Barely a year after achieving self-sufficiency in 2018-19, India is going back to importing pulses due to massive Kharif crop damage and bleak prospects for rabi sowing of these protein-rich foods, following the long spell of unseasonal rainfalls in October and November.

The imported quantity of 2.37 million tonnes for the financial year 2018-19 gets offset by an almost equal quantity of pulses held by government agencies such as the National Agricultural Cooperative Marketing Federation (Nafed) and others. The government is currently sitting on a buffer stock of 800,000 tonnes of tur and 1.5 million tonnes of chana for market intervention in case prices escalate.

“The scenario, however, is precarious for urad with almost 50 per cent of the crop damaged in major growing states such as Madhya Pradesh. Urad sowing fields received incessant unseasonal rainfall in October and November, resulting in waterlogging and crop damage. While India’s pulse imports are expected to jump significantly to meet the deficit, much would depend upon the government policies with opening up import beyond the quota fixed for the current year,” said Zaverchand Bheda, chairman, Indian Pulses and Grains Association (IPGA) while announcing the 5th edition of The Pulses Conclave, a biennial global conference on the seeds scheduled in February. 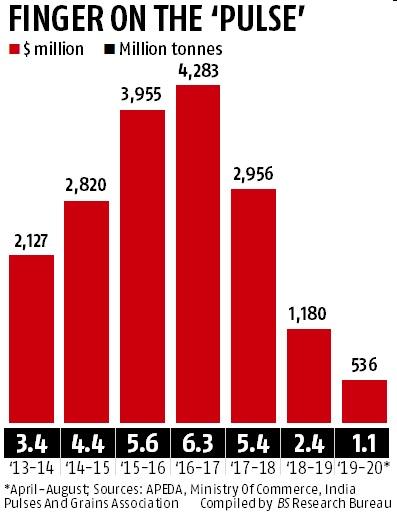 Experts believe that India’s import of pulses in 2019-20 would surpass last year’s level, despite the existing buffer stock, to meet the country’s annual demand of about 26 million tonnes.

The government has fixed the tur import quota at 400,000 tonnes this year which, according to trade sources, has already been imported. Traders are waiting for the quota to be enhanced in order to import more.

While 30 per cent of the overall crop damage is estimated to be in Maharashtra alone, other agrarian states such as Madhya Pradesh, Gujarat, Rajasthan, West Bengal and Uttar Pradesh have also reported huge crop damage, with a large chunk of standing agriculture plants submerged in water. Large quantities of standing plants like sugarcane, oilseeds, pulses, jowar, paddy and bajra are estimated to have been destroyed in the field, stoking fears of lower output this year.

“Considering India’s buffer stock is almost equivalent to the quantity of import, we had achieved near self-sufficiency last year. But the government needs to act now, as urad consumption cannot be replaced with other pulses. Farmers in Myanmar are set to commence urad bean sowing in the weeks to come. Urad sowing would increase in Myanmar if the Indian government allows its import over and above the quantity announced for the entire year 2019-20,” said Pravin Dongre, a pulse importer.

Meanwhile, urad is said to have lost around half its estimated production of about 1.5 million tonnes. While traders and stockists have already imported some 150,000 of urad so far this season, primarily from Myanmar and East Africa, farmers in those countries currently have another 240,000 tonnes for export to India.

To make import imminent, urad dal prices in India have doubled the past six weeks to trade currently at Rs 85 a kg in wholesale, from Rs 45 mid-September. Prices of other variety of pulses have also jumped by 10-15 per cent the past six weeks.

“Standing pulses crops are reported to have been badly damaged due to water logging in the field, following incessant unseasonal rainfall in October and November. Heavy crop damage was seen in Madhya Pradesh, Maharashtra and other growing states, with an overall estimate urad output loss of 50 per cent. This has escalated urad prices in the past six weeks,” said Sunil Sawla, Secretary, IPGA.